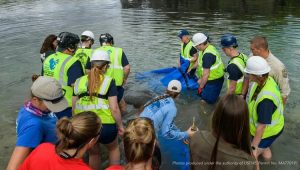 Plantaina is a young female manatee who was rescued as a baby near Fort Lauderdale, Florida when she was found abandoned at less than a week old. She was just 28 pounds at the time, making her the smallest manatee ever rescued. After a successful initial rehab, Plantaina was released back into the wild (Feb. 2021). However, she was soon discovered to be losing weight which required another rescue and rehabilitation before coming to The Seas with Nemo & Friends at EPCOT, where 24 other manatees have been rehabilitated over the years.

“Manatees are an iconic species in Florida, and their conservation impacts all of us,” said veterinarian Scott Terrell, DVM, and director of animal & science operations at Walt Disney World Resort. “Caring for these amazing creatures benefits all of the animals that live in their coastal habitats and the human communities around them.” 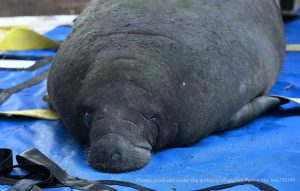 Through collaboration with other rehabilitation facilities over the years – as part of the Manatee Rescue & Rehabilitation Partnership (MRP) – Disney animal care experts provide ill and injured manatees with the stable, controlled environment they need to make a recovery and prepare for release. The manatees receive exceptional veterinary care including preventive health exams, a calorie-rich diet, and around-the-clock monitoring to help them return to the wild when they are fit. Once released, some manatees like Plaintaina are assigned a satellite tracker that enables experts to continue to monitor the animal’s health, migration, and socialization with other manatees. These satellite trackers are designed to break away if they become entangled in order to prioritize the health of the manatee. 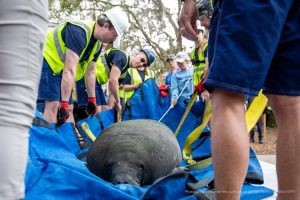 Unfortunately, manatee rescues and rehabilitations are becoming a lot more common in Florida. A severe lack of food is causing concern as runoff and pollution continue to threaten their main food source. Each of these large herbivores can eat up to 300 pounds of seagrass a day, and many are beginning to starve from the lack of aquatic plants, further impacting this endangered species.

Plantaina is one of six manatees to complete rehabilitation at Walt Disney World Resort over the last year. Manatees in rehabilitation at Disney may receive up to 150 heads of romaine lettuce each day depending on their individual needs, along with the occasional treat of apples, carrots, and sweet potatoes, to help them return to their natural weight before they are able to be released. 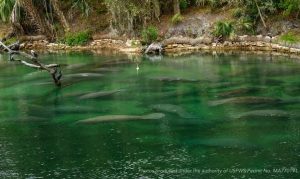 In addition to the releases, the Disney Conservation Fund has provided grants to more than 15 nonprofit organizations to better understand manatee populations, biology, and habitat use, aid in the restoration of seagrass, and provide care for manatees.

These manatee releases, along with funding from the Disney Conservation Fund and knowledge and expertise from Disney’s Animals, Science, and Environment, help make a difference in the conservation of this amazing species.

Learn more about the Disney Conservation Fund and see and hear from the team that rehabilitated Plantaina at Walt Disney World News.

*Footage was produced under the authority of USFWS Permit No. MA770191