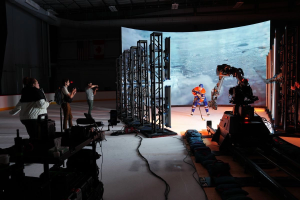 With the NHL season returning for the second year of The Walt Disney Company’s seven-year deal, senior associate producer Courtni Regan and the production team were recently in Las Vegas for the annual NHL Player Media Tour (PMT). The PMT is an opportunity for ESPN and NHL rights holders to meet with the clubs’ top stars to conduct interviews, photo, and video shoots, and – importantly – create and gather content to use for game and studio productions, marketing, PR, and social media throughout the entire season. The two-day event also provides a unique opportunity for the production team to try new technology, test new concepts, and push the creative vision for the look and feel of the company’s NHL coverage.

While Courtni is involved in several aspects of ESPN’s NHL production, including the creative look for what goes on air, she’s also created a bit of a reputation for herself as the music aficionado of the team. The role of “DJ” isn’t officially in Courtni’s job description; her passion for music gets to shine as she deftly curates each athlete’s playlist to get them hyped for the work ahead. A week prior to the PMT, Courtni begins the tedious process of hand-selecting songs for each individual athlete that comes on set. Throughout each shoot, Courtni uses her broad knowledge of music to adjust the playlist, adding songs that fit into an athlete’s preferred genre.

Courtni recently took the time to explain one of her many roles at the NHL Player Media Tour, and to share a behind-the-scenes look of an interesting and largely unknown contribution she adds prior to the start of the NHL regular season.

Tell us a little bit about what you did at the 2022 NHL Player Media Tour and specifically what you were doing with music.
CR: I guess you would call me the “DJ” and hype girl for the ice set where we shoot player portraits for the upcoming NHL season.

How did you come up with the idea to make music playlists for each of the players here today?
CR: I’m of the mindset that music can alter anyone’s mood or attitude. It is very important part of the process in helping each player feel comfortable by providing something familiar to them in a setting that can feel awkward to some. Even if I can find one song they like or a genre; I usually run with songs from there. My knowledge of songs is pretty broad which is helpful when thinking of songs on the fly. I did this for a few Tennis portrait shoots as well and it is always a game changer. 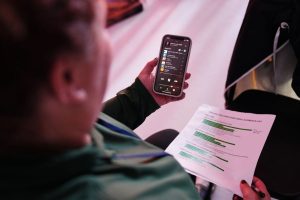 Can you walk me through how you approached this project, the process?
CR: The media tour is definitely a fun event for me to work. I get to have a responsibility that is much different than my roles throughout the year. One of my passions gets to shine through, and it’s fun to see the players react when I play a song they like. I also try to match which kind of shot we are trying to get. If it is more of an intense pose, I try to have the music reflect the mood we are trying to capture.

How time consuming a process is this? When did you start planning for the PMT?
CR: I start about a week out looking for different songs. We get a list of players ahead of time, so I usually go through the list and make notes of the player’s favorite music or song. I search for interviews they have done, their team arena’s playlists and their social media for inspiration. Sometimes I can even tell what kind of music they like by their Instagram captions. For example, if they quote a Drake lyric. From there, I will combine all the songs into a playlist and usually remember who likes which music. Most guys like Rock, Rap/Hip-Hop or Country. There are some EDM lovers as well. If for some reason I can’t find anything, we ask them when they get to our set, and I quickly brainstorm some songs that can work.

How much do you love music? What are your go-tos?
CR: I absolutely love music and have music for the majority of the day, every day. I’m even listening to some music as I type these answers out – ha. Music is very mood or activity driven for me. If I’m working out, I generally go hip-hop. Some current but mostly 90s/2000s. If I’m working, I’ll put on a shuffle of Revivalists, country and 90’s. Driving is very similar; something I can sing along to (usually classics). Cleaning is more relaxing or R&B or I’ll try a new artist/random playlist I find online. I’m always in charge of playing music for car rides, friend get-togethers or group workouts too.

Have you gotten any feedback directly from the players or even made any observations if they’re feeling their jams?
CR: Yes! Quite a bit actually which has been nice to hear and see. Sidney Crosby, Trevor Zegras and a few others have made comments, or you can tell by their body language. They are loose and feel the music as they’re posing which comes across the camera. 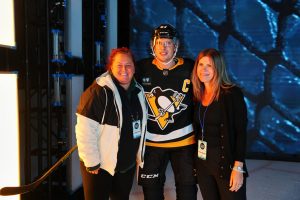 Anything else you think readers should know about what we’re doing at the Vegas Player Media Tour and the upcoming hockey season?
CR: I’m very fortunate to work with great leaders and fellow colleagues on this project that understand the importance of this shoot. The footage is used everywhere and all season long. Everyone is wanting to create the best atmosphere for the players to make them feel relaxed and enjoy the process because ultimately, it allows us to get the best footage. I’ve had some help from colleagues suggesting songs as well. Definitely a team effort!

Below: This year’s player media tour playlist that helped hype up the top stars of the NHL (click here if it doesn’t load for you).