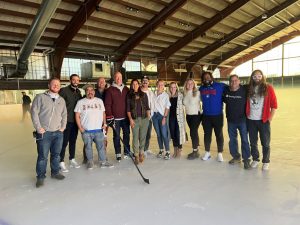 Lucas Ferraro, senior director, Sports Marketing, shares a behind-the-scenes look at the making of “That is Hockey,” the creative marketing campaign for ESPN’s second season back with the National Hockey League, and what it was like working with hockey legend Mark Messier.

To promote the start of the 2022-23 National Hockey League regular season, Lucas and the creative team worked with Hockey Hall of Famer and ESPN analyst Mark Messier as the “voice of hockey” to further establish ESPN and ESPN+ as the “home of hockey.”

Leaning into the rising young stars, future hall of famers and overall competitiveness of the game, the spot aims to illustrate that hockey is the best it’s ever been and ever-evolving.

The season began in North America on Tuesday, October 11, with an opening night doubleheader Face-Off on ESPN and ESPN+ in a rematch of last year’s Eastern Conference Final with the Tampa Bay Lightning visiting the New York Rangers at Madison Square Garden and the Los Angeles Kings hosting the Vegas Golden Knights at Crypto.com Arena.