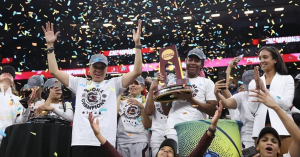 For decades, Disney has embraced both gender equity and sports diversity throughout its coverage of both professional and collegiate sports, and those commitments are stronger today than ever before. Furthering the fandom behind historically underrepresented sports, leagues, and players, this year alone – Disney will cover over 12,600 live women’s sporting events totaling more than 26,000 hours of coverage across ABC, ESPN, ESPN2, ESPNU, ESPN+, and ESPN3 – and brands are lining up to get in the game.

“It’s inspiring to see the marketplace take notice of something we’ve been saying for decades: invest in women’s sports,” said Deidra Maddock, Vice President, Sports Brand Solutions, Disney Advertising. “As an industry leader, our priority is ensuring that our consumers can view the top athletes in action, anywhere, at any time. Through growing support from advertisers, we’re able to deliver even more content to this passionate fanbase.”

ESPN has been the exclusive broadcaster for the NCAA Division I Women’s Basketball Tournament since 1996, and 2022 was a record-breaking year for the championship event. Advertisers hustled to reach this unmatched audience, with Disney Advertising selling out inventory nearly a month before the competition began. Fans showed up in masses from the beginning of the season, with ratings for the Selection Show up over 160% from the previous year, and stayed until the final buzzer. The Championship Game scored over 4.9 million viewers – the most-watched women’s basketball national championship game since 2004, and up 18% from 2021.

Beyond the basketball court, the most exciting moments in women’s collegiate athletics will be broadcast across ABC, ESPN, ESPN2, ESPNU, ESPN+, and ESPN3. Half of all collegiate events on ABC and ESPN will be women’s sports, underscoring Disney’s dedication to equality. Disney’s dominant championship presence includes 15 NCAA Women’s Championships – most recently including ice hockey, field hockey, and cross country. Women’s sports revenue is expected to grow double digits due to demand and rating growth.

The inclusive approach to sports media extends from college through professional leagues. ESPN was a founding partner of the WNBA 26 years ago, and its commitment to elevating the league has never wavered. This season, Google, a WNBA Changemaker and Presenting Partner of the WNBA regular season and Playoffs will collaborate with Disney to broadcast the season from the first tip to the final championship buzzer, which was on Saturday, May 7. ABC, ESPN, and ESPN2 will spotlight 25 regular-season games, the All-Star Game, and the WNBA Draft. For the first time ever, the first round of the WNBA Playoffs will be played in a best-of-three series, which will air exclusively on ESPN networks. Another first for the league, “ESPN Fantasy Women’s Basketball” will open for signups in early April, with State Farm as the fantasy game sponsor.

Live games are only the tip of the iceberg for ESPN. A key initiative for the company is sharing stories of women beyond the game through original programming. To celebrate the 50th anniversary of Title IX this June, ESPN is dubbing it “Fifty/50 Month,” telling the stories of 50 women, across multiple formats, including long-form reporting, documentary storytelling, podcasts, features, and social content. At the center of the original content, the rollout will be a multi-part documentary from award-winning filmmaker Dawn Porter, exploring the hard-fought battle for equal rights in education and athletics. Champion, Gatorade, and Google will help bring these groundbreaking stories to fans, serving as sponsors throughout the month. Five short films presented by W. Studios and Google will examine diverse stories of women in sports, all featuring women directors and producers.