The NCAA Women’s Basketball Championship is one of ESPN’s premier events every spring and such an occasion deserves a marketing campaign befitting of the moment. “Feel it Here” encompasses the emotions and gravitas of a championship run, with reflections of two-star players who know the experience well – A’ja Wilson and Diana Taurasi.

Michelle Berry, Sr. Director, Sports Marketing, and Cheryl DiCarlo, G&L Creative Director, took some time to reflect on the campaign, how the concept came to life and what it means for the women to finally use March Madness. 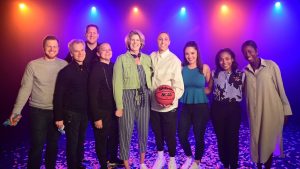 What did you want fans to get from this campaign?

Michelle: To feel all the emotions the event delivers, why it’s a must-watch, and how it’s all here on ESPN. By featuring Diana Taurasi and A’ja Wilson reflecting on what the Women’s Tournament has always been but can now officially be called March Madness – the work authentically exudes the gravitas of the historical moment.

Women’s sports are on fire. We’ve come so far yet there is still so far to go. We’re proud of ESPN’s continued leadership, commitment, and role in fueling the flame for equality, empowerment, and cultural change. We collectively shine the light of exposure for women’s sports, tell the stories and inspire dreams. Our overarching intention for this campaign was simple yet transcendent as we reinforce our category leadership and play our part in propelling women’s sports forward. Show it and they will come. Make them feel it and change the world.

How significant was it to show the importance of the March Madness moniker?
Michelle: Extremely important for the power in what the brand association signals – long-overdue validation. The recognition that the women’s tournament delivers the same level of play, electricity, and range of emotions as the men’s tournament. And the significance of that, for not only the women playing in this year’s tournament but the ones before, the fans and younger generations of both girls and boys.

How did the concept of “Feel it Here” come about?
Cheryl: “Feel it Here” is inspired by the pride and equality sweeping girls and women in sports. Being able to leverage the March Madness brand for the first time helps unleash these feelings as the campaign celebrates this monumental shift. We used this golden opportunity to celebrate legendary players and tournament moments, giving fans all the feels.

Anything fun happen or a stand-out moment from BTS when shooting with Diana or A’ja?
Cheryl: That “sweet confetti feeling” brought out the genuine joy in both Diana and A’ja. When the prop confetti fell upon their shoulders, they were transported back to the feeling of winning it all. Their elation was real, and it lit up the set.

What do you want fans to know?
Michelle: The product delivers. With all the upsets in the first two rounds, it proves the parity is there. We’re only one weekend in and the madness is in full effect, and we still have two more to go. It’s time to get on board and feel it here.

Learn more about ESPN and how they are pushing the boundaries across every media platform.