For art and design intern Ellie, meeting Mickey Mouse at Epcot Character Spot was an unforgettably magical moment – not only because he’s the mouse who started it all, but because Ellie herself created his photo backdrop!

It is the accomplishment Ellie is most proud of on her internship so far. “I never expected that Disney would give me the opportunity to do that as an intern,” she says, noting its large scale and prominence in the park. What’s more, the Epcot Character Spot project gave Ellie the opportunity to collaborate with her fellow intern and friend, Mana.

“From doing the initial concept sketches to seeing the final, there were a lot of glitches and kinds that we needed to work out, and we had such a tight deadline,” Ellie recalls. Mana and another colleague joined on to assist: “It was a total collaboration in the end…that’s what this department is all about. We’re like a little family.”

Mana, who designed Goofy’s section of the backdrop, also considers Epcot Character Spot his favorite project to date, calling it “so grand.” “To get that done was pretty crazy,” he acknowledges.

As art and design interns for Disney Parks Live Entertainment, Ellie and Mana work on everything from graphic design to illustration, character design, sign design and typography. Their work is featured across the parks, resorts and cruise ships. Sometimes, they’ll even receive requests from Imagineering to do art. “It’s a little bit of everything,” explains Ellie. “You’re not confined to one specific discipline…I never know what I’m coming in to do, since we do a lot of stuff.”

While Ellie had an interest in art, she wanted to pursue a degree in political science. Then, she saw Disney’s Frozen in theaters: “I thought, ‘Okay, everything is out the window. I have to be involved in this somehow.’ From that point on, I started working toward animation and anything to do with the company as my goal.” Ellie earned her BFA from Ringling College of Art and Design, where she learned about “the entire pipeline of animation, from concept to completion.” Prior to graduation, the Disney Parks Live Entertainment team visited her school for a recruiting fair. It was a perfect match. Ellie accepted their feedback on her portfolio, reached out to Ringling alumni in the department and, later, received her offer.

Likewise, Mana’s passion for animation can be attributed to a Disney animated feature debut. He practiced drawing and painting at his elementary school in Zimbabwe and planned to study more traditional art disciplines. “Then, I heard about animation when The Lion King was released,” Mana recalls. The film became “huge” in Africa and was close to Mana’s heart. “When I heard there were people behind the scenes who actually create these characters and environments,” he explains, “I knew I wanted to be a part of that.” Mana attended Savannah College of Art and Design on a tennis scholarship, and is currently in the process of earning his MFA in illustration. While he was not familiar with the Disney Parks Live Entertainment team, he knew upon reading the internship description that it was the right role for him. 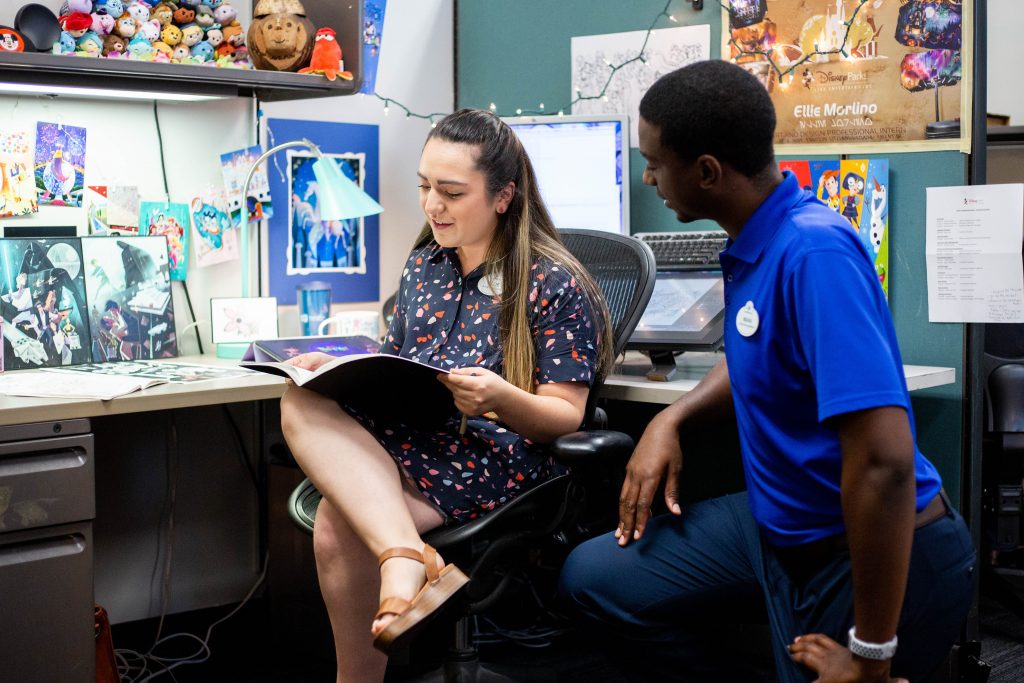 Adapting what he calls “that tennis mindset” to his art, Mana begins every workday with a warm up. Next, they meet with the art directors to get a rundown on their daily tasks. Mana comments that, with their constant flow of work and tight deadlines, “you have to be on your toes.” Ellie, too, credits her time on the art and design team with improving her efficiency. “I feel like I’ve learned so much so fast,” she remarks.

Ellie and Mana are constantly inspired by the incredible artists on their team, including each other. Mana remembers finding Ellie on Instagram prior to their internship start date and being impressed by her unique work. He also had the opportunity to collaborate with one of his favorite Disney animators on a project. “Being in an environment with a lot of amazing artists,” Mana says, “ trying to take in as much as possible.”

Both Ellie and Mana share the same advice for prospective art interns: diversify your portfolio. “Have a bit of everything,” suggests Mana, “from character designs to props and vehicle designs.” He recommends looking to Disney art books, such as The Art of Tangled, for inspiration. “Show how diverse you are, because the department is really diverse.” adds Ellie, noting that she received similar feedback from her teammates when she first met them at the recruiting fair. “They want to see your individual style and how you translate things. I wouldn’t worry about trying to conform to anything; just be yourself in your art.”

Mana sums up his experience at Disney Parks live entertainment in one word: unreal. Ellie concurs. “I can’t believe Mana and I are both here,” she gushes, “It’s incredible. It’s like a dream.”