Some would say it takes hoping, wishing and a whole lot of faith to shape your dreams into a reality. But for these Disney College Program alumni, they’ll tell you it takes hard work, dedication and genuine passion to get to the place you’ve always wanted to go. We’re shining the spotlight on Michelle and Ryan to get an in-depth look into their journeys from Disney College Program participants to Management Interns.

Michelle has wanted to work for The Walt Disney Company since she was seven years old. Her brother participated in the Disney College Program when she was young, and seeing how much it helped him reach his Disney career goals, Michelle aspires to follow in his legacy.

She started her Disney journey in 2015 on the Spring Advantage Disney College Program. Her role was quick-service food and beverage in Magic Kingdom Park. She loved her time with Disney so much that she decided to extend her program in a parade audience control (PAC) role. As her program came to a close, she knew in her heart that it was time to go back to school. However, she hoped to return one day and become a Disney leader. With that, she traveled back to Portland State University to obtain her degree in Business Management with a minor in Psychology.

Ryan’s story is just as magical, though it started a little differently than Michelle’s. Ryan began college at just 17 and he didn’t quite know just what he wanted to major in. He did some research and landed on Nursing at Moorpark College in California. Soon after, he stumbled upon the Disney College Program. Something in him compelled him to go, and now he couldn’t imagine his life without it. He finished his Disney College Program in August 2015. He knew he needed to go back to school, finish his degree and get some more experience so he could come right back. He changed his major to Business with hopes to start his career with Disney. His adventure unfolded as he followed that pursuit in 2017 as a Jungle Cruise Skipper on another Disney College Program. During this program, he applied for the Food and Beverage Management Internship. Ryan has worked in the full-service food industry since he was 15 years old. He started as a dishwasher and worked his way up to becoming a regional trainer.

With their experience, both Michelle and Ryan were identified as strong candidates for a Disney Management Internship. 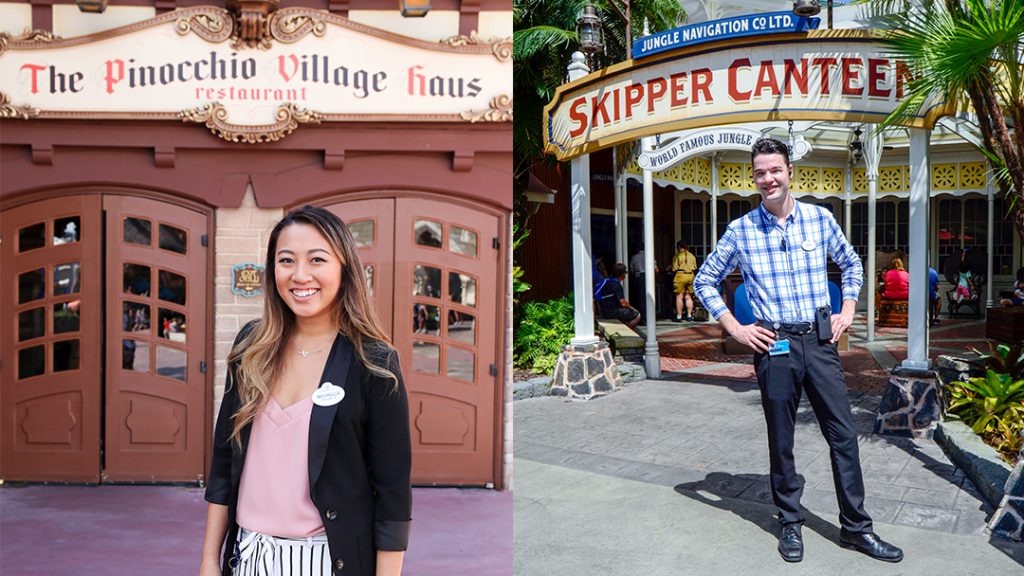 “I got my phone screen a few days after I applied,” Ryan says. “I’ll never forget it. The recruiter’s name was Ian, and I thought he was going to drill me with questions. To my surprise, it felt like a conversation with qualifications peppered in.” After his phone screen, he was invited to take part in an in-person panel interview. “I was terrified,” Ryan says. “I thought it was going to be like the show “Shark Tank”, walking into a room with these gold glowing nametags, and I was going to leave crying or something.” To his surprise, it wasn’t. He shares that the interviewers made him feel super comfortable, but it wasn’t like a Disney College Program interview. “You have to be genuine and show how passionate you are. They made me feel like I could do it and that there wasn’t a right or wrong answer. They just wanted get to know me and my experience.”

After heading back home to Portland and applying for the Management Internship, Michelle was patiently waiting for her phone screen. She had not heard anything for about a month. “It scared me because I didn’t know what to expect.” She made it all the way through the interview process and was then invited to a video panel interview. “I was at the Walt Disney World Resort on vacation when I got a call from the recruiter.” She grins. They asked if she could talk for a few moments about her interview, and then informed her that she got the job. “I’d been telling my friends and family that this is what I’ve always wanted to do and I’m actually doing it!” You could hear the immense pride radiating from her smile.

For Ryan and Michelle’s training, they had to learn every position at each location, on top of learning how to be a leader. Michelle says that completing her Disney College Program in quick-service food and beverage helped her to grow in her current position. She was used to the situations that occurred in the operation and could use her experience to guide her.

Ryan explained that the trainers give you all the tools to do a good job, but you have to apply yourself. “It’s a lot to balance, but I think when you have someone in Casting who sees hundreds and hundreds of people applying, and they say, ‘yes you can do this,’ they see something in you. It was rigorous and a lot of information all at once, but it makes you want to do it.” 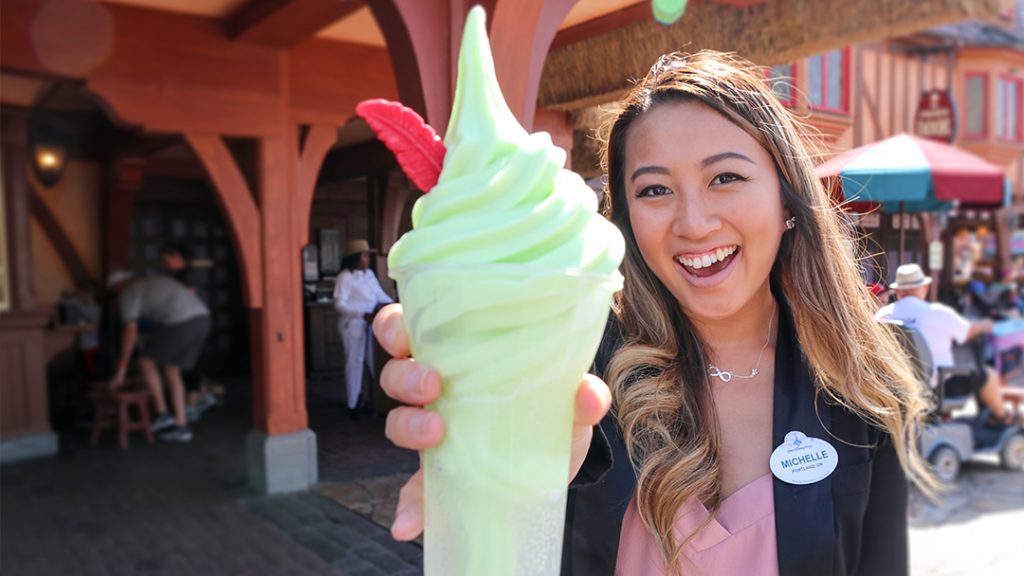 Michelle carries out her days as a quick-service food and beverage leader at Gaston’s Tavern, Prince Eric’s Village Market, Storybook Treats, Storybook Snacks, The Friar’s Nook, and Pinocchio Village Haus in Magic Kingdom Park. “I love working in the food industry, especially quick service-type food. It’s really fast-paced and trains your mind to work fast.” She smiles. “Guests are typically surprised with how quick our service is. I think it’s because we keep the interaction going. We like to keep them entertained to make waiting enjoyable.” When things get really busy, Michelle is always there for her Cast. She never wants them to feel stressed. She will hop right on the line to help them get the job done.

Ryan says the people are the best part about his role. He is a full-service food and beverage leader at the Jungle Navigation Co. LTD – Skipper Canteen in Magic Kingdom Park. “The most important part of my job is development. It’s knowing every part of the business and being able to drive results.” He explains. “Right now, I’m learning. I’m the intern who is trying to learn everything that I possibly can.” He hopes to be the pillar that other Cast Members can lean on. He doesn’t like the idea of the removed leader. “I think if your Cast Members see that you’re there and that you care just as much as they do, it will drive results. My area’s Proprietor says you don’t have to know every answer, but you have to know someone who does. It takes time, but eventually, you’ll learn.”

Both Ryan and Michelle agree that being a leader takes time management and balance. Michelle says, “It’s hard to pinpoint what exact skills it takes to be a leader. There are many different types of leaders, but even though we have different traits, we have one common goal.” Ryan furthers that by saying, “There are so many balls in the air, and you need to be ready to catch them at any given moment. The tasks are delegated, but we are one cohesive unit.”

Michelle advises that if you are participating in the Disney College Program and you are looking into a leadership role, do some research. “Network with other leaders and learn the different paths they took to get to where they are now.” She explains that being a leader is not something that can happen overnight.  It’s a huge learning process, but if you have the drive and the bravery to push yourself, anything is possible.

If Ryan could tell his Disney College Program self what he knows now, it would be to “make your ambitions known, ask for feedback and take your job seriously. You could be driving a boat and telling jokes, but be the best that you can be in that role. People will take notice.”

Being a role model is notably the best part about their time as interns. Michelle explains that “I’m a resource to my Cast and I get to inspire them to be the best that they can be. Providing the Disney level of guest service is humbling and honorable.” Ryan notes that “at the end of the day; my ultimate goal is to establish myself as someone who deserves to be here. We’re so invested in the business. We want each other to grow and succeed because we want the business to succeed.”

I asked Michelle what her dream role was, and she says, “I’m living it! This is my ultimate dream, and I couldn’t imagine myself anywhere else.” She would love to work for Disney Cruise Line or in Entertainment one day. Her biggest hope is to become well-rounded and experience as much as she possibly can.

When I asked Ryan the same question, he answered without thinking twice. He says, “I would love to build my career with Disney, staying in this capacity. I want to keep my hands on the moving parts. I like being in front of the Guests. If I can stay in some sort of leadership role, maybe even something beyond that—I couldn’t picture a better life.”

Nothing compares to being a leader in The Walt Disney Company. Every Guest who visits the Walt Disney World Resort is unique. From working with Make-A-Wish children, to seeing families who had to evacuate their homes to escape hurricanes, to celebrating reunions and honeymoons—they are here to be immersed in the magic of it all. Everyone is here for a good reason. They want to have a good time, and it’s the leader’s job to facilitate that. Ryan says, “I like having the responsibility to make that happen.” He smiles. ”It’s amazing – the meshing of making memories as we build this amazing business in such a seamless way. I’m so thankful to be a part of this.”

As a Disney Professional Intern, you’re a part of a learning experience. You don’t always know as much as the person who has 20 years of experience over you, and that’s ok. You’re here to grow, thrive and with all hopes, keep pursuing the dreams that fuel your fire!

Ryan
Favorite Park: Magic Kingdom Park
Favorite Attraction:  Gran Fiesta Tour Starring the Three Caballeros in Epcot
Favorite Character: Peter Pan
Favorite Show: “Am I allowed to say “Wishes: A Magical Gathering of Disney Dreams” at Magic Kingdom Park? If I can’t say “Wishes” then definitely Fantasmic! at Disney’s Hollywood Studios. There’s just something about the memory of it being 2015 on the last day of my Disney Program with all of my friends around me and all of us just balling our eyes out watching “Wishes” all together. The best part was when the show concluded and they played the progressive jazz version.” He proceeded to start singing.