Last year’s Girls Who Code Summer Immersion Program powered by Disney brought bountiful learnings for the students, not only in computer science and STEM-related subjects, but also life and career-related wisdom.

From life lessons shared by Ed Catmull, who will be coming back and speaking to our Girls Who Code (GWC) 2017 class, to career and general insights from Walt Disney Animation Studios Screenwriter and Director Jennifer Lee, the knowledge the girls collected was invaluable.

Before I dive into the conversation, it’s important to provide context as to why filmmakers like Jennifer Lee and the stories she illustrates from her perspective matter. It’s also essential to point out the significance of her talk to young girls who strive to be in a field that lacks gender diversity.

Lee is the first-ever woman Director at Walt Disney Animation Studios—you may have heard of her film that went on to be the highest-grossing animated film of all time. Hint* ‘Let it go’– we can’t, which is why a second film is in the works!

Again, this matters because a captivating story about the power of fear over love starring two sisters, written and directed from a woman’s perspective, proved to be the most relatable.

The students who listened intently to Lee’s advice are aware of the GWC organization’s objectives of aiming to close the gender gap in technology. To provide some awareness — in 1984, 37% of all computer science graduates were women. Now that number is just 18%. Also, women are on track to fill just 3% of computer science-related fields out of the 1.4 million jobs that will be available by 2020. (according to girlswhocode.com)

A woman who is a pioneer in her field that lacks gender diversity, speaking to girls that are passionate about a field where women are underrepresented as well, I felt brought more hope, inspiration, and determination to those young girls in the room like never before.

So, without further ado, below is a condensed transcript of the conversation that Lee had with the girls (all questions came from the girls): 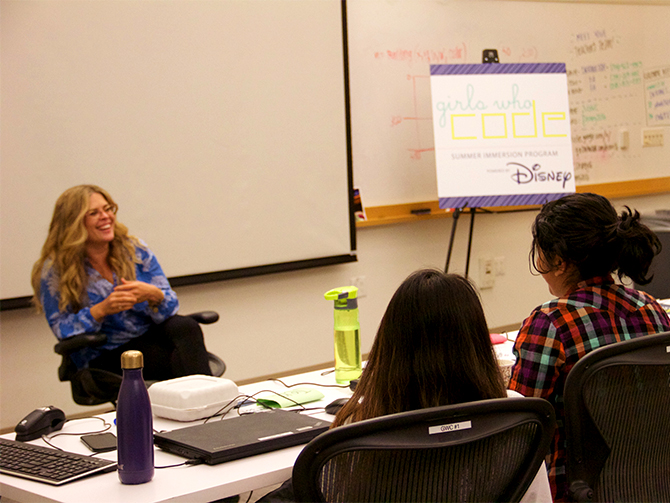 What made you want to go into a field that you knew lacked gender diversity?

“A single mother raised me and I had sisters. It was a house full of girls and we did everything. It never dawned on me that I couldn’t do what I wanted to do.

I saw my mom as such a strong woman — she was a nurse and she was going back to get her teaching degree. She was always independent and really strong. So growing up in a household like that, I just went after what I wanted to be a part of and what I cared about. I love film, I love storytelling, I love movies.”

How did you deal with being one of the few women in the room?

“I think the thing that helps me the most is not being afraid of that . I think you can feel shut down when you’re in a room with men and you realize that your ideas are not being heard. People tend to speak where they feel safe and it can get discouraging. So I always kept saying to myself, ‘keep about the work and don’t shy away. Have the courage to stand up or just say it again. It’s okay to be frustrated.

It actually took me awhile to realize I was the only one . Until it was one of those days where I couldn’t look across at this girl that’s going to get what I’m feeling in this conversation and that kind of hit me.

In an interesting way, I got most of my direct opportunities from men so that’s another thing you’ll probably deal with in these fields you’ll get to work in professionally, it will be mostly men.

John Lasseter, I think what he’s fantastic about is he saw my talent that he believed in, he gave me that chance, and he trusted me. He said ‘walk beside me’ and then he said ‘go on your own, go ahead you got it.’

So not being afraid to build those relationships as well with great mentors – they don’t have to be women, they can be men that speak to your talent. Always just know that you have the right to say ‘let’s look at my work’ and that it will always speak for itself.

I’m not going to pretend I didn’t have to find my way in the room — now we have these big meetings and I’m never the only woman in the room, there’s at least three or four of us.

How do you get through challenges in your career?

“Confidence. I think for a lot of people that’s a big struggle because you fail a lot when you dare to do fields that are really challenging, like this — where it requires a lot of technical skills, imagination and inventiveness. There are a lot of people out there that say ‘this is what you have to do to succeed’ or ‘you should have done this by this age’ – you hear things like that all the time and it’s hard not to believe it. I think that held me back for a long time.

I always felt like if I had the power and passion, I had the right to be there. I have to earn my way in by working really hard; the quality of work has to be evaluated on that.

I think it’s so amazing that you’re here because you’re aiming for what you want and knowing it’s not going to be easy—ever. But it’s not easy when you take the easy way. If you have deficits in something just acknowledge them and find a way to compensate, because no mind can do everything. But doing something that challenges you and you love and gets you up in the morning—that is worth fighting for.”

How do you get your ideas?

“I think it’s interesting when you talk about being inspired by the issue of global warming (one of the GWC students plans to code an app fueled by climate change), it’s as simple as that. Sometimes there’ll be something in the news and it will really sit there for me.

It could be a thematic theme. I mean Frozen, fear versus love and the power of love over fear had a lot to do with the news. Fear was taking over, and everyone is afraid to live and to be things, or they’re afraid of each other and it was proving to be more powerful than love and that was really upsetting to me.

So, in that case, it was something I was seeing in the news but that had nothing to do with sisters, it just inspired me and gave me an engine behind what I wanted to do.”

Do you think being imaginative is innate?

“I think everyone has imagination, it’s just in different forms. I feel like when we have to tick boxes that require doing certain things, that’s where we shut ourselves down.

There are so many things that you have yet to discover and it feels like we hole ourselves into types we’re not. Everyone dreams differently and it’s all about learning how you connect. Don’t be afraid to get that help and recognize that your way of communicating and being inspired in this world is just as valid.

My first screenplay, I got through it and my second screenplay, my character was all over the place, and the third was better. You learn each time and you never think you’re going to get it and then you just all of a sudden realize ‘oh I wrote that’–it happened.

You have to trust that when you start something you don’t know how to do, you’ll be able to do by the end. But you have to know you’re going hit a wall and say ‘I don’t even see how I’m going to get past this.’ It’s okay that you’re going hit those walls and I didn’t trust that, and now I do.”

What’s your favorite part about your job?

The other thing that I love is the people I work with. We’re all working on the same thing, everyone has different talents, and there’s energy when you find a company that’s inspired by what it does, it’s a big thing.

Working with Frozen, a lot of people I work with came to Disney with a dream of making a big fairytale when they were little — that’s what inspired them. No one thought we could make a fairytale like that again but we all believed in it. To see how excited everyone gets and you get to work with all of them I think it’s the best part.”

How do you have a productive brainstorming session?

In animation, it’s very collaborative, the story artists come on very early so every day you’re in a room of about 15 people, it’s almost like you brainstorm every day. But sometimes we have a specific brainstorm about one area of the film. It’s usually three: the writer, director, and the head of story. We sit, we take it all in, and we go in and say ‘What works for us? What challenges us? What inspires us?’

But listening and feeding everyone your ideas — even the craziest ideas, I write down. Even if it’s the most ridiculous thing if it gets a reaction out of you and makes you go ‘No way!’ I write it down because it means that it did something.

An example of brainstorm we had for Frozen was a Sister Summit. We were in a meeting and talking about sisters because Anna and Elsa didn’t really have a connection at all. So, we talked about sisters — older and younger and making it a relationship we actually care about. So, we had a Sister Summit and those women who had sisters came in and we just let it out about what it’s like to have sisters — the good and the bad. And the stories that came out, it was an energy; you could feel what’s at stakes with siblings and what that feels like. It really helped the movie.” 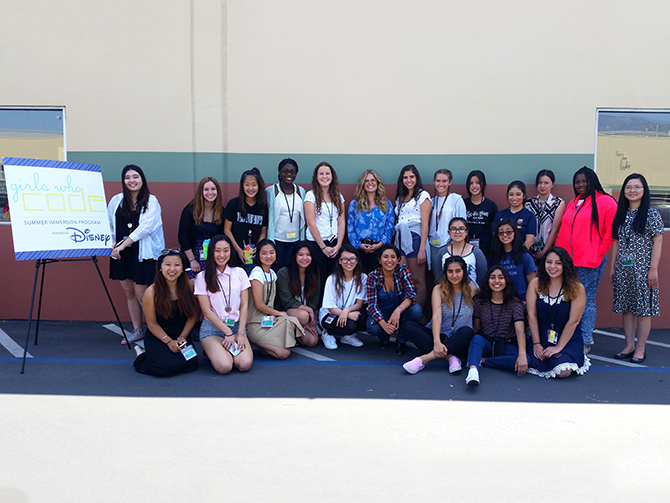