Every day, ESPN technologists are delivering content and data, and solving challenges on a world-class level of scale and sophistication. Ben supports the Concept Development team, as a Studio Product Development – Software Engineer Intern, and started his Disney journey on a Florida-side Disney College Program. We caught up with him, to learn more about his role and internship experience. 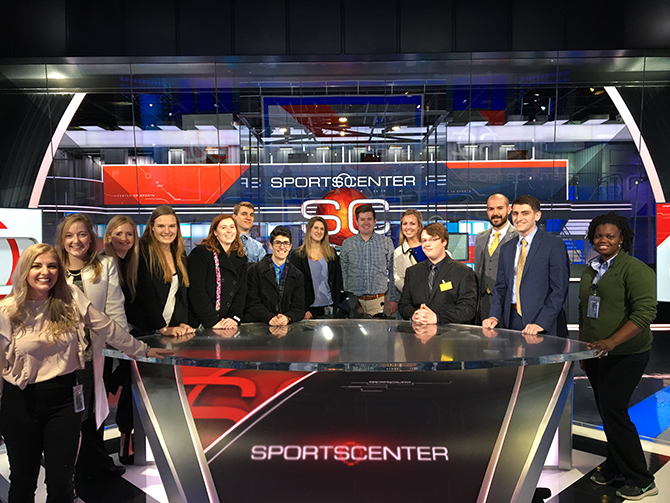 What inspired your interest in technology?

Growing up, my parents took me to a fair bit of entertainment, theme parks, movies and rocket launches. And one of the questions I always asked was…how did they do that? How do the country bears sing, how does the stage move, how did that dinosaur come to life? It wasn’t about the emotional value, or the artistic value, though I had to learn to appreciate those too, but the technical value of how things are done intrigued me. That’s part of why I wanted to work at Walt Disney World Resort, to get a glimpse behind the curtain, and learn how things tick. And that’s why I applied to ESPN, to learn more about how things work, and how to produce the tools for showmanship; the technology behind it.

What technology trends excite you most in the live sports broadcasting market?

The push toward virtual sets right now is one of the more interesting trends. It’s been around for a while; the comedy central show Tosh.O has been using them since 2009. But they’re usually static, the camera is locked down, the host doesn’t interact with the environment other than the non-green screen desk in front of them; it’s not compelling technology. What’s exciting now is that companies are looking toward virtual sets where the host is actually in the set, showing reflections and shadows on the floor, having the camera be dynamic toward the talent, doing really crazy things in virtual space that keeps the illusion going, if just for a second longer.

What technologies are you most excited to learn about during your time as a Professional Intern?

Television broadcast is huge. I’m really interested in the software behind the effects, and learning some of the magic with virtual and augmented reality that ESPN puts on.

What type of projects will you be working on during your time at ESPN?

Video streaming. There’s a few applications currently used on-air or in production that are locked at 30 frames per second. If what I’m doing works, those are all going to be bumped up to 60 fps 1080p, of course until things go 4k.

What technical skills (programming languages, frameworks, etc.) do you think are most important for your role?

I wouldn’t say there’s any particular framework that stands out. I’m writing mostly in C++ and C# at the moment, but everything I’m doing could very well be done in Java, JavaScript, VB, Python. The reason I’m using C++ and C# is because my particular projects lend themselves to it, and if I was doing another project, I would use tech that made those projects easier as well.

What’s your favorite example of innovative technology at ESPN?

One cool example is the pylon cams for football games. It gives so many opportunities for showing new angles, giving new appreciation for what the athletes are doing, enhancing the show. The work of putting the cameras, the computers, the power source, the transmission equipment all into the little pylon, which will be trampled and beaten, and still needs to function, is amazing to me.

What made you want to work in a technical role at ESPN?

I wanted to work at ESPN because with all the content they produce – all the shows, broadcasts, events they support – the technology they work with has to be innovative to keep at the bleeding edge of the market, and rock solid. If some piece of code supporting a studio production breaks, suddenly you can’t show pictures, the bottom line goes out, the background screens go static. There are hours and hours of support and stability that many industries don’t face.

I also have the interest of computer vision, and augmented reality. Working in the sports world, you have so many direct applications of both technologies, some of which have been around for decades (the yellow line at football games) and some which are just starting to emerge ( ball tracking at the home run derby).