Does your heart beat for the stage? Disney cast members have the opportunity to be on stage all the time, making dreams come true for the young and young-at-heart. Our talented Disney performers have unique roles that immerse guests into a land of make-believe come-to-life.

Information regarding time and specific venues will be added as it becomes available.

Do I need to register to attend an audition?

Our auditions are open call auditions.  Advanced registration is not required.

Please see the below Q and A for more information.

What are the steps to audition?

The audition is one additional step that must be completed by those wishing to pursue the character performer role.

In addition to a character audition, each individual selected to be a character performer must be evaluated and certified at the Walt Disney World Resort. In the event an individual is unable to perform the role as described, they will be placed in another role based on availability.

The Disney College Recruiting team recommends applying online prior to the audition if possible.

I’m a current Disney College Program Participant. May I attend these auditions?

Keep an eye on your weekly email from the  Housing Communications Team for updates on this audition or other auditions which may be available to current College Program participants.  Current participants should not attend the auditions listed on this page.

I’m unable to attend one of these auditions. May I submit videos and pictures instead?

Anyone interested in auditioning to be a character performer on the Disney College Program must physically attend one of these auditions.

This allows the Disney Creative Entertainment Team to fairly and accurately evaluate your skills compared to others auditioning in your height range.

I’m unable to attend one of these auditions. May I audition when I arrive in Florida?

There is usually an audition held exclusively for current College Program participants towards the end of their program. This audition is for full time, part time, and seasonal opportunities. If there is an opportunity to extend in entertainment as a character performer, this audition would serve that purpose as well. This “end of season” audition is the only audition that is regularly held for current participants.  Please keep in mind that business needs can change and there is a possibility that an ‘end of season’ audition may not take place.

Are there any costs associated with attending an audition?

There is no cost to attend the audition. However, those attending the auditions are responsible for any costs incurred when traveling to and from the audition.At the Audition

What do I need to wear/bring?

Clothing
You should wear comfortable clothing that allows a free range of movement. It is not not recommended to wear a dress, skirt, or tight jeans.

Please do not come dressed in a costume. 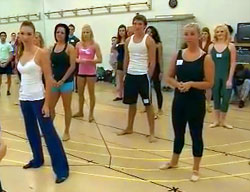 Appropriate attire for an audition

Shoes
Many studios do not allow street shoes. Rocks and dirt embedded in the sole of shoes that are worn regularly outside of a studio environment may damage the studio floor. You should bring a clean pair of dance shoes or sneakers to change into upon your arrival.

Character heels, jazz heels, or any type of high heel shoe are not allowed in these studios.

Please do not wear flip flops.

Other Items
It is not necessary to bring resumes or head shots to these auditions.

It is not necessary to have anything prepared (monologue or song).

How long is the audition?

The audition process can last anywhere from 1 – 6 hours. How long one will spend at an audition depends on the number of people who are in attendance and/or how far one progresses.

We suggest bringing water and a snack.

These auditions do not have callbacks.

Will there be cuts at the audition?

Yes. There will be at least one cut during the course of each audition.

Please note, making it to the end of the audition does not mean that a character performer position will be offered.  Final audition results will be communicated via email (see Notification Q and A’s below)

What do I need to do to be considered to be a Disney Princess look-alike or parade performer?

As part of the one audition, Disney Creative Entertainment will identify those who may be potential character look-alikes. Those who demonstrate strong dance/movement skills may be identified as potential parade performers.

Please note: all performers, including Disney Character Look-alikes, will also perform in meet-and-greets as fully costumed Disney Characters in our Parks and Resorts. This includes wearing large body costumes, heads, and feet, and exposure to hot and humid weather.

May a family member or friend come with me to the audition?

Our auditions are closed auditions. Unless someone is auditioning, they will not be allowed into the audition room. Depending on the location, there may or may not be a place for a supporting friend or family member to wait.

Are these auditions for vocalists or musicians?

The auditions listed below are for Character Performers at the Walt Disney World Resort only.

Please keep in mind that roles as a vocalist, musician, actor, etc. are not available as part of the Disney College Program.Auditioning during the Application/Interview Process

Will attending an audition automatically move me forward in the process? (ex. from ‘in submission’ to ‘in progress’)

I said I would audition during my telephone interview and now I cannot attend. Who do I contact?

You do not need to contact anyone. It is known that some individuals who indicated they would audition during their interview will not show up. That is OK. The information is asked during the telephone interview to help estimate the number of people attending each location and also assists with check-in.

I didn’t mention auditioning during my interview, may I still attend an audition?

A student may still attend an audition even if they did not specifically discuss auditioning during their interview.

The only exception is if a student was informed that they are no longer being considered for the program following their application submission, web-based interview or their telephone interview. (more information below)

I wish to be a character performer, but I have not been asked to interview before the audition, may I still attend an audition?

Yes.  It is a requirement for anyone wishing to be a character performer to attend the audition.

Unless you have been specifically told you are no longer in consideration for the Disney College Program, you should still audition.

If I have interviewed and received an offer for another role, may I audition?

If someone has already interviewed and was invited to participate on another role at the Disneyland Resort (California), they should not attend these auditions.

If someone has already interviewed and was invited to participate on another role at the Walt Disney World Resort (Florida), they are more than welcome to attend an upcoming audition.

If I have interviewed and was told that I am pending a final decision, may I audition?

Yes. Applicants who are currently pending and wish to be considered for the character performer role are welcome to attend the auditions since a final decision has not yet been made on their status.

If I have applied/interviewed and was told that I am no longer being considered, may I audition?

No. An applicant who has been informed that they are no longer being considered for our program based on application, web-based interview or telephone interview should not attend. This decision will not be changed.Notification

How will I be notified of my audition results?

Decisions will not be made until after all of the auditions have been completed.

Those selected will receive an offer for the character performer position via email.  This will also appear on their dashboard.

An attempt will be made to notify those not selected as well.  However, because this must be done independently of the candidate dashboard, this communication will not appear on the dashboard.

As the notification process begins, this article will be updated regularly.  Once all offers have been made, this update will be posted.  If someone does not see an offer on their dashboard when this update is made, they were not selected to be a character performer.