Spring has sprung and today is Holi, one of India’s most vivid and joyous festivals!

Also known as The Festival of Colors, Holi has been celebrated for centuries and represents the arrival of spring, love, friendship, and happiness. The vibrant colors are the most well-known aspect of the holiday, where everyone throws (and becomes drenched in) colorful powders, and friends and family celebrate together by having fun.

Mira, Royal Detective is Disney Junior’s animated mystery-adventure series inspired by the cultures and customs of India and features an episode with a story spotlighting the holiday. Mira is a brave and resourceful young girl who is appointed to the role of royal detective by the Queen of the fictional land of Jalpur. In The Holi Festival Mystery, Mira and her friends must locate missing water balloons for the upcoming Holi celebration.

In celebration of Holi, we caught up with Shagorika Ghosh Perkins, the series’ cultural consultant and consulting producer, and Emmy®-nominated writer and producer Sascha Paladino, the series’ executive producer, to find out a little more about the episode and Disney Junior’s first show featuring a South Asian protagonist. 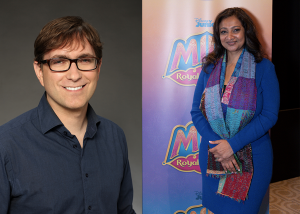 Tell us a little bit about your role responsibilities for the show.

Shagorika:  My role is primarily two-fold. First, it is to provide an overarching perspective on India and its many subcultures based on the intricacies of geographical regions, including character names, apparel, costumes, cuisines, festivals, and more. Secondly, it is to ensure cultural accuracy throughout the production process – from scriptwriting to final animation – to balance the authenticity.

Sascha: My job is really to be responsible for the big picture of the show. I need to make sure that all the many pieces go together, from the writing to the voice acting to the design to the storyboarding to the music and choreography to the sound effects. I’m making sure that it all comes together to create a coherent, organic, engaging episode.

What went into the creation of The Holi Festival Mystery episode from a cultural standpoint?

Shagorika: Together, we discussed apparel that people would wear for the festival, the time of day that the celebrations would take place, musical instruments that may be played during the Holi parade in town, as well as how Holi could be explained to kids through a simple song/dance sequence.

Sascha: Our holiday episodes always have extra moving pieces to them. Authenticity is really important for us in every episode, but for the holiday episodes, we want to make sure that the details of that holiday are really specific. We spent extra time researching Holi, trying to learn everything we could about it, to make sure the episode was as authentic as possible.

How does the team ensure the show is as authentic as possible?

Sascha: That’s always been our top priority and one way is to make sure we have as many South Asian voices in the process as possible. Making sure that the people who know this world, who know this culture, are able to make their voices heard – from writing to design to storyboarding to directing. And Shago, as our cultural consultant, looks at everything and makes sure it’s authentic. By having all these layers of intentionality, we’re working to make this show as authentic as it can be.

Why was it important to include a Holi episode for the show?

Shagorika: Holi is one of the major festivals celebrated in most parts of India and it is celebrated outside – on the streets, and in parks with friends, family, colleagues, and strangers. It is a festival that celebrates the coming of Spring and an early harvest. It also celebrates unity, friendship, and love – character traits that Mira embodies and demonstrates, so it was perfect to include an episode on Holi in the series.

Sascha: Holi is such a fun holiday, there’s so much joy in it. Our hope for these holiday episodes, and also every episode, really, is that kids who are of South Asian descent see themselves reflected in the show. And for kids that are not of South Asian descent, we want to inspire them to learn more.

Based on your experience celebrating the holiday, how did the episode bring those rituals to life?

Shagorika: The story idea of Mira and the kids meticulously planning a balloon fight was reminiscent of many past Holi celebrations. That, and the townsfolk gathering for a parade in the late afternoon with a dhol (a double-sided barrel drum) and songs was another cultural aspect beautifully depicted in the episode. The Holi Mystery is one of my favorite episodes, and the festival itself is so special for me – it is meaningful and celebrates the harmony of the human spirit with nature, bringing together people in joyful celebration irrespective of their background.

Scenes from Mira, Royal Detective – “The Holi Festival Mystery”. Mira must follow the colorful clues in order to save the town’s Holi Festival.

What is the one thing you would like viewers to take away from the show?

Shagorika: I’d love for viewers to understand and embrace a culture from a country that some may or may not be familiar with – to see that kids, parents, and community is the same everywhere though they may look, dress or celebrate differently.